Keto Butter Coffee, also known as Bulletproof Coffee, is not an average coffee latte, but much better! Keto Butter Coffee is a nutritious, creamy coffee drink full of healthy fats. Buttered coffee is a freshly brewed black coffee or espresso mixed with grass-fed butter and MCT oil to form a frothy, creamy coffee full of lots of healthy fats to satiate you until lunch. It’s an ideal breakfast fuel to become “bulletproof” for the rest of the day and avoid hunger (if you’re still hungry, you’re not in ketosis). This keto butter coffee is popular with those who follow a keto diet because it is high in fat, so it satisfies you until the next meal and helps you stay in ketosis.

The origin of Bulletproof coffee

“Bulletproof coffee was first made by Dave Asprey, a “biohacker” who created Bulletproof Coffee and the Bulletproof diet. Asprey then developed a recipe for Bulletproof Coffee after traveling to Tibet and tasting tea drinks made with Tibetan yak butter. When he returned to the United States, he experimented with buttery drink recipes and in 2009 posted the making of a buttery coffee drink on his blog. Asprey claimed that Bulletproof coffee combined with other “health hacks” increased his IQ by more than 20 points. Asprey founded Bulletproof 360, Inc. in 2013. Asprey launched the Bulletproof brand after the development of Bulletproof Coffee. With its Asprey Bulletproof coffee, it also draws the attention of coffee consumers to avoiding mold toxins such as ochratoxin in coffee.”
For me, as an IT engineer, Dave Asprey’s life story is also interesting because “he also studied computer science and then earned a bachelor’s degree in computer information systems from California State University. After graduating from college, Asprey worked in the IT industry for companies like Bradshaw or 3Com. He also led an Internet and web engineering program at the University of California, Santa Cruz, in which Asprey created one of the first working instances of cloud technology. Its name is intertwined with the well-known IT companies Trend Micro, Blue Coat Systems and Citrix Systems.”  After completing his IT career,  he is now struggling for a longer and quality life with developing Bulletproof Diet and Bulletproof products.
“He met his wife, Lana Asprey, a doctor, at an anti-aging conference. They live in Vancouver Island, Canada. Asprey also talked about the positive effects of biohacking on her sexual health, and the Bulletproof diet also helped her wife with polycystic ovary syndrome.”

The domestic yak is a type of long-haired domesticated cattle found throughout the Himalayan region. The Po Cha is the Tibetan people’s favorite tea which is consumed several times a day by Tibetans. This tea, made and consumed by locals, is vital to their diet and health. Consuming pocha has many benefits, due to its high caloric content, it preserves energy levels. The butter in the drink also helps prevent lips from cracking in the windy steppes of Tibet. It is also believed to aid digestion, focus the mind, and promote a healthy cardiovascular system. Do you want to try it? The authentic ingredients used to make po cha are hard to find outside of Tibet, but can be perfectly replaced with any smoky-tasting black tea or even coffee to suit our own tastes. You don’t even have to travel for yak butter to Tibet, it can easily be replaced with grass-fed butter, ghee or even coconut fat.
A blend of coffee, grass-fed butter and oil goes hand in hand with the principles of the Keto diet. It is important that the butter is made from the milk of grass-fed cows and is unsalted. Grass-fed ghee is also a good substitute, although the taste is slightly different than butter, it has a slight nutty taste, I love it. Use a medium chain triglyceride oil such as MCT oils (Medium Chain Triglycerides) for the oil. Conventional coconut oil is another good substitute, but not as effective at increasing ketones.

Are there any disadvantages to buttered coffee?

For someone whose body is not accustomed to such high levels of fat intake, you may want to start slowly, with less fat, step by step with the oil and butter to get your body used to it, otherwise you may have diarrhea and be a little dizzy. For those living on high carbs, I don’t recommend this buttered coffee because the body will always process and use the instant carbs first and store the fats. If you are lactose intolerant, replace the butter with ghee or coconut fat. Bulletproof coffee is high in calories and saturated fat, so add that amount of fat to your daily energy intake.

How to make Keto Butter Coffee?

1. Brew a cup (250 ml) of fresh coffee with filtered water.
2. Add the coffee to a blender, add a teaspoon to 2 tablespoons of MCT oil (gradually added to get your body used to it) and a tablespoon of butter.
3. Stir in the blender for half a minute. You will get a creamy latte-like drink that you can have for breakfast to get your day off to a great start!

Tip: If you don’t have a blender on hand, just pour everything into a large mug and mix it with a milk frother or hand blender until creamy. If you substitute ghee or coconut fat for butter, unfortunately you won’t get as much creamy coffee as you do with butter, but don’t be intimidated by the enjoyment of your bulletproof coffee!

Have you tried this recipe?

Per a cup of Keto Butter ÁBulletproof" Coffee

This site uses Akismet to reduce spam. Learn how your comment data is processed.

What is Keto or Ketogenic Diet?

A Person We are Proud of: Szilard 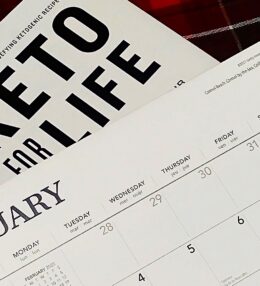 Enemies of New Year’s Resolutions: The 10 Most Common Excuses to Lose Weight; The Way to Success

Our Results After Ten Months of Keto Diet

What Happens When You Sin on Keto?

Keto For Us – Weight Loss Diet or Lifestyle?

We use cookies on our website to give you the most relevant experience by remembering your preferences and repeat visits. By clicking “Accept”, you consent to the use of ALL the cookies.
Cookie settingsACCEPT
Manage consent

This website uses cookies to improve your experience while you navigate through the website. Out of these, the cookies that are categorized as necessary are stored on your browser as they are essential for the working of basic functionalities of the website. We also use third-party cookies that help us analyze and understand how you use this website. These cookies will be stored in your browser only with your consent. You also have the option to opt-out of these cookies. But opting out of some of these cookies may affect your browsing experience.
Necessary Always Enabled
Necessary cookies are absolutely essential for the website to function properly. These cookies ensure basic functionalities and security features of the website, anonymously.
Functional
Functional cookies help to perform certain functionalities like sharing the content of the website on social media platforms, collect feedbacks, and other third-party features.
Performance
Performance cookies are used to understand and analyze the key performance indexes of the website which helps in delivering a better user experience for the visitors.
Analytics
Analytical cookies are used to understand how visitors interact with the website. These cookies help provide information on metrics the number of visitors, bounce rate, traffic source, etc.
Advertisement
Advertisement cookies are used to provide visitors with relevant ads and marketing campaigns. These cookies track visitors across websites and collect information to provide customized ads.
Others
Other uncategorized cookies are those that are being analyzed and have not been classified into a category as yet.
SAVE & ACCEPT
X